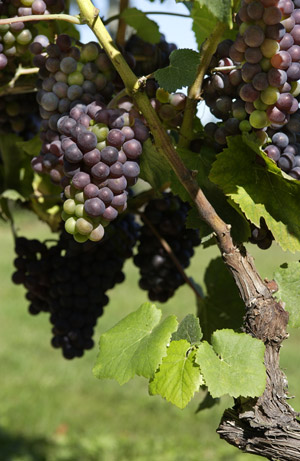 John 15:1-8 is a troubling passage; many find the references to vines, branches and fruitfulness confusing and the implications frightful. Recently our pastor, Dave Gadoury, shared the key to understanding this passage, which requires knowing how grapes grow and vines are pruned.

Here’s the first four verses in the NIV:

“I am the true vine, and my Father is the gardener. 2 He cuts off every branch in me that bears no fruit, while every branch that does bear fruit he prunes so that it will be even more fruitful. 3 You are already clean because of the word I have spoken to you. 4 Remain in me, and I will remain in you. No branch can bear fruit by itself; it must remain in the vine. Neither can you bear fruit unless you remain in me.

Since Y’shua is obedient to the Father, those who do God’s will through Y’shua will be productive. God trains the vine and prunes the branches.

Verse 2 is problematic. If you believe the NIV (and most commentary) pruned branches are “cut-off”, implying unfruitful believers are lopped off, later to be tossed into the fire.

So does no fruit in verse 2 mean no salvation?  My pastor didn’t think so and I agree.

The Greek keyword for “cut-off” is (k149) airo (ah’-ee-ro) – take-up or take away. The most common use is to take up, lift up, even raise up.  (knnn indicates Kohlenberger dictionary numbering while Snnn indicates Strong’s numbers.)

As a contrast, (k554) apairo combines (k608) ap -out of + (k149) airo – take up. Clearly, if God removed unfruitful believers, the better Greek word apairo would have been used. Also the Greek word (S1571) ekkathairo (ek-kath-ah’-ee-ro) found in 1 Corinthians 5:7 referring to purging old leaven would have indicated removal of unwanted branches. Ekkathairo literally means: take away out of, to purify. It means removal of impurities. Notice it includes the word airo. The word used in verse 2 regarding the fruitful branches God prunes is kathairo, which implies purity, but lacks the “ek” prefix (“out of” or “away from”).

Verse 3 holds the key, but the meaning of airo must be understood within the context of grape vine pruning.

When studying Scripture it’s important to avoid getting micro-focused on words or specific verses but to also consider where dialog and events occur because the environment may establish an important context for the verse.

In John 14:31 Y’shua says “Come now; let us leave”, meaning the group is departing the Upper Room where the Pesach Seder was held. However, the journey is not finished until we read John 18:1:

When he had finished praying, Y’shua left with his disciples and crossed the Kidron Valley. On the other side was an olive grove, and he and his disciples went into it.

Chapters 15, 16 and 17 contain an almost continuous sequence of discussion and prayer by Y’shua. But if we believe John 14:31, this occurred neither in the Upper Room or in Gethsemane. The Synoptic gospels leave out this detail. It’s unlikely Y’shua would say, “Come now; let us leave”, then speak and pray for another 20 minutes or so in the Upper Room.

For what it’s worth, I believe on their journey to Gethsemane the group stopped in a vineyard. In ancient Jerusalem vineyards would have been everywhere, including the house garden where the Seder was held. A vineyard would allow Y’shua to teach direct object lessons, reinforcing what he taught during the Seder, while also creating a memorable context for events unfolding in the coming hours. He could point directly at the vines while speaking.

Like many kinds of fruit trees, new shoots from old growth vines do not produce fruit the first year. The cane has to winter-over, then be pruned the next season so it will produce fruit. The cane should be kept off the soil though, because if covered, it will root and grow on it’s own, drawing nourishment from the soil instead of the vine. So new canes are lifted and tied up. They receive more sunlight which stimulates greater growth.

In the second year, right around Pesach, while vines are still dormant, the gardener will look for signs of vitality then prunes off about 85-90% of the top of each cane – he doesn’t take the whole branch! This not only encourages growth, but also produces fruit. As for those branches that were fruitful the prior season, they need to be cut back to what’s called renewal buds. Season after season canes are cut back to renewal buds which stem higher on the branch while the branch below grows thick and woody. So pruning strengthens the branch base while stimulating production of fruit. You can see this branch structure and fruit in the photo above. The thick portion down the bottom is the vine’s arm. The branch is the woody vertical part and the cane is the green branch with the fruit hanging off.

Careful tending and pruning of old established grape vines is critical to the quantity and quality of the wine produced.

Until Roman occupation, the Israelites let their grapevines sprawl on the ground in tangled masses. Rome’s success in wine production came from using trellises to lift the canes and fruit off the ground, keeping them from problems such as fungus, pooling water and overcrowded branches.

Given the overall context of the passage, it’s possible Y’shua was preparing the disciples for their own deaths – as branches from the vine hoisted up onto Roman trellises (crosses) to yield fruit for his kingdom, and to be cut off from life, to yield more fruit season after season. All of disciples present expect John died as martyrs. They were all quite fruitful for God. And it turns out 12 branches per vine is considered optimal for fruit production!

Let’s return to verse 3 where Y’shua makes it clear he’s expecting the disciples to be fruitful:

3 You are already clean because of the word I have spoken to you.

The disciples have been pruned because the keyword used is (k2754) katharos – clean pure, clear of responsibility, innocent, and they are in the vine. The non-productive part of their lives has been removed.

Most people forget that as Jesus is speaking these words, Judas is not present. He’s away arranging the betrayal. So Judas is not included in all the promises and prayers since John 13:30. Remaining true to Christ is not a matter of producing fruit but being willfully obedient as a sign of your unconditional love. This becomes even more clear when we consider verse 4:

John, as the only disciple who knew Judas was betraying Christ that night [John 13:26], would be sensitive to the imagery conveyed, and the points Jesus was making in the vineyard. Here’s the critical piece – sometimes branches emerge from the root and threaten the productivity of the whole vine. They are not “in” the vine, and will not be fruitful. Like Judas, some may mistakenly reject Y’shua’s claim of Messiahship to return to their “roots”, religious or otherwise, missing Y’shua’s point that the vine is critical to fruitfulness. Verses 5-6 emphasizes this:

5 “I am the vine; you are the branches. If a man remains in me and I in him, he will bear much fruit; apart from me you can do nothing.
6 If anyone does not remain in me, he is like a branch that is thrown away and withers; such branches are picked up, thrown into the fire and burned.

Those who aren’t in Christ, but want to look like Christ – be the vine, when they are merely branches. Like Judas, they aren’t fruitful for the Kingdom of God. They wither the life out of the kingdom, and so are pruned off and discarded into the fire. But if you are in Christ, look at the promise he makes if you remain faithful and true:

7 If you remain in me and my words remain in you, ask whatever you wish, and it will be given you.
8 This is to my Father’s glory, that you bear much fruit, showing yourselves to be my disciples.

God is the Master Gardener, he wants the abundant fruit of our lives for His glory. It may take some yearly painful pruning, but in the end the promised fruit will be glorious and eternal!

Reference How to prune a grape vine.
Grapevine Pruning
History of the Grapevine in the Holy Land
Growing Grapes