Yesterday, a spectacular day weatherwise, my family attended a wonderful Christian celebration of marriage, held on the Diocese of Providence grounds overlooking beautiful Narragansett Bay. Hundreds of wonderfully diverse families attended (est. 500-600 people) and the highlight of the day was a renewal of vows, with a specific Catholic renewal ceremony, followed by another ceremony for other Christian denominations. 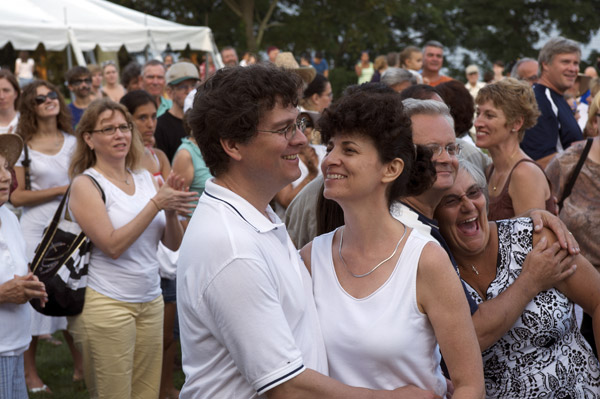 Outside the gate of the Aldrich Mansion were protestors who were looking for attention. So where do you think every major media reporter focused? That’s right – the protestors.

One could talk about the many positive reasons to celebrate marriage and families, particularly nowadays when divorce rates are high, marriage rates decreasing and out of wedlock births are rampant (more than 40% in some areas).

No – all major stories were about marriage “equality”. In other words, the focus wasn’t really about those married families attending, but mostly about the ones outside the gate. You can tell from the news headlines:

So was this all just political theater?

The event was put on by National Organization for Marriage – Rhode Island, which is politically opposed to same-sex marriage efforts. With Rhode Island as the only New England state that does not legally recognize same-sex unions, this event declares a political message. However, it seems to me that drawing attention to heterosexual marriage and expecting the media to be friendly to the cornerstone of our culture is downright suicidal.

So the coverage was political, but the young, progressive news reporters all missed (showed disdain for?) the real major story – our families. Instead, most irresponsibly conveyed shallow, incendiary stories, with quotes like this one from the Associated Press:

“We’re not going to let them have events that exclude LGBT people,“ said Brian Chidester of the Providence Equality Action Committee, referring to lesbian, gay, bisexual and transgender people.

I’m sure Mr. Chidester has more substantial material, but given that at least one TV station actually lead their video with a photo of one same-sex couple renewing their vows outside a restricted area, it’s apparent LGBT’s were not excluded from the event, and as far as I know, the couple wasn’t harassed for being there.

Still, my question for Mr. Chidester, and those who think like him: Why do people need your approval to hold events that might exclude LGBT people? This particular event was heavily Christian in nature throughout the celebration. Shall we lay aside our moral, religious convictions as you demand?

Who, then, is advocating controlling the choices, beliefs and activities of others? Isn’t this the very charge which you accuse us of holding?

The sole basis for your committee’s approval is gender orientation. Do you grasp the full role marriage plays in our culture?

Should the majority heterosexual population define marriage around the idea of marriage as a binding of affection between partners?

Do you fail to see that legal recognition of marriage is not about recognizing partnerships of affection, but encouraging promising, procreative partnerships which tremendously impact the public and are essential to us all?

Here’s the ideal of Christian marriage upon which Western civilization was primarily built :

Joined at the altar, those chaste virgin couples demonstrate with their very lives, through a whole-hearted commitment to their posterity, that they hold society’s successful natural long term propagation in the highest esteem. Society approves of this serious, on-going commitment by calling pure marriage between one chaste man and one chaste woman greatly unique, beneficial and thus ‘very good’. This is the core of the marriage covenant, showing approval of this union to everyone to ensure the ‘life’ of society. The chaste couple is esteemed as a model to follow. As it naturally stems from our two sexes for procreation, the marriage relationship cannot be arbitrarily redefined, because no other model provides this unique, natural family.

With marriage, society rewards the overwhelming sacrifice on the part of the chaste heterosexual couple who prepared for childbearing and childrearing with unique rights and benefits. At the same time, and with the same ideal relationship, society shames individuals who do not enter into the pure marriage covenant which holds the potential for producing new generations. Valid exceptions to this shame are made, but they must always be due to mercy or great personal sacrifice, which maintains social moral integrity.

The consummation of the marriage covenant promises, but doesn’t always produce, society’s greatest joy – children, and society awards more benefits to the growing family. like a cell dividing, with every new generation, society grows.

Society’s concern regarding marriage then, is to secure it for this public effect. So the state, while not hampering the affections of individuals, must always guard against an immorality that would substitute non-ideal models of marriage that fail to produce or even promise, the continuity of society.

– from “The Kids are Watching”

And that’s the real story that was missed.

It’s about a certain transcendent commitment – a covenant: a promise of life.

During the Catholic vow renewal, my wife and I noticed 2 small children scurrying about their parents legs as the couple looked deeply into each other’s eyes, with occasional glances down, followed by short bursts of laughter, and angelic, divine beaming faces shining up at them.

The pure joy that comes from two becoming one flesh.

We weren’t debating anything.

We came to declare in a single unified voice, that promise of Life: To our pro-created families, to the generations who would look back upon their ancestors and say – they loved each other by their marriage commitment, and in so doing, they loved us, unconditionally.