I’ve read a lot of commentary regarding Biden’s excessive debate laughter and constant interruptions, but have yet to read a perspective which properly frames the debate in global terms, even from the most thoughtful commentators. 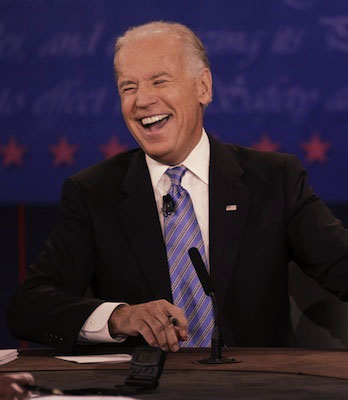 Joe Biden’s inability to control his laughter during a serious vice-presidential debate is a cause for great concern, particularly if he did so to deliberately play to his base.

The vice-president forgot Ryan is there because he was nominated to represent a solid portion of the citizens of the United States. This nomination may have been through Mitt Romney, but Romney himself has been vetted through a particularly stringent process.

In other words, Joe Biden wasn’t laughing at Paul Ryan and his ideas – he was laughing at US citizens. Does Biden laugh at Chinese representatives? What about the Russians? The Taliban?

The contempt shown to the US citizenry by a sitting vice-president is a far worse transgression than mockery by any comedy channel or highly partisan news channel pundit. It broadcasts to the world a peculiar disdain for much of the US electorate.

If this was a strategy to play to his base, then his handlers are showing a very serious blindness to appearances on a highly volatile world stage. If a deliberate campaign strategy places election interests over the interests of the US electorate, they are not fit to govern.

That many fail to recognize the depth of his indiscretion, should be a great warning sign – as a nation we’re getting numb to the insults. This is toxic.

The partisan divide, like a calloused scab, is hardening, making it more difficult to work together on solutions in the future. It’s a highly visible projection of instability.

Just as it’s particularly dangerous for individual spouses to expose their marital problems with others who could then seek to exploit the opening, it’s deadly for national leaders to be so openly divisive and contemptuous of their own people.

If neither side sees such warning signs, then we’re well on our way towards civil war.

And that is no laughing matter.

Update: This morning after I posted this, I found Mark Levin is also bringing up the same point.